This beer has nothing to do with the way dad dresses, with the jean shorts and New Balance kicks. It has everything to do with what dad grew up drinking. In the early 1900s, it was popular around this area, and especially in Chicago. The Old Style from back then is not what we have today, but today’s is pretty delicious. They went through a change back in 2009 which added a double fermentation process to the beer, and created a richer, more carbonated lager. This is a great pick to share with dad while watching the Cubbies play the Marlin’s at 2:20 this Sunday.

Not Your Father’s Root Beer – When this was released in our area about 5 years ago, it was all the rage. Even my dad, who did not grow up a beer drinker, thought this one was a tasty treat on a hot summer day. Made by Small Town Brewery out of Illinois, it tastes and feels just like an ice cold root beer…but harder. It comes in at just under six percent; and if it didn’t have that on the label, you wouldn’t know it has alcohol in it. This is great for a dessert or night cap, and you could even throw it on top of ice cream for an added treat.

Foggy Geezer – Recommended by Pastor Dennis from Bethany Church, hosts of Red, Wine and Brew – July 2nd. When we were talking about the Tap 5 at our Coffee Cruise this week, he said this would be a great one, and I agree. The name is hilarious, and the beer is fantastic. It comes from WarPigs, a collaboration brewery owned by 3 Floyds and Mikkeller (a brewery from Denmark). It’s hazy, juicy, fruity, and has hints of tropical fruits and peaches. It comes in a black can, white writing, and it’s one you should definitely try…especially if you like a low bitterness, tropical IPA. It’s abv is just under 7%, so drinker beware.

Kiss the Cook – This one is very new to our area, and they’re from a town called Fairmount, Indiana. (Boyhood home of James Dean, who is also buried there) If you are looking for a good ol’ fashioned Double IPA, and something with a little kick, Kiss the Cook is a beer you have to pick up for you and dad to share. It’s an 8.8% and another beer with that tropical bouquet of hops. I have been pleasantly surprised with everything these guys have done, and they also have great names like: I’ll Turn this Car Around, Socks and Sandals, You’re Grounded Mister, The Sodfather, and Pull My Finger. 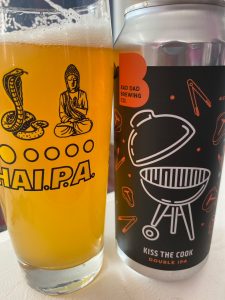 Kool-Kid – Throwing this one in honor of my dad, like myself, he’s a Goshen College graduate. Whenever my parents come to town, a trip to Goshen Brewing is a must for at least one beer. This one is a 4.5%, fruited sour that is not only mouth-puckering, but also has a nice sweet balance of tangerine and passionfruit. They add the fruit to the beer during fermentation, and describe it as a juice box…so I would say OH YEAH, it’s like an adult version of a juice box.