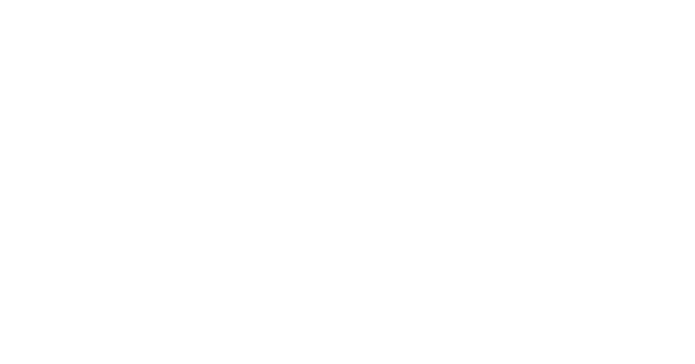 Life can change drastically in the blink of an eye. Sometimes thanks to joy, but sometimes due to tragedy. We have a false sense of control in our daily lives, because in reality, there is very little that we are actually in control of.

It was an honor to speak with both Kelly and Jamie, whose lives will never be the same after a summer outing with 3-year-old Corban.

It was a warm summer day and a few moms had gotten together with their kids to play in the sunshine and enjoy time together. Kelly is a CCMA for Beacon Health System and had a rare afternoon off. She could have been at a ball game with her son or at work, but had the invite to join her friends for a splendid day and did just that!

While she and her friends caught up, some of the kids came running to them in hopes to break an argument.

Jamie is Corban’s mom, and she was there with her feet in the pool. What no one noticed: out of the 6 kids there, 1 was missing.

He was only 3 years old.

Corban had choked on a hot dog and fell face first into the swimming pool.

Every parent’s nightmare was Jamie’s reality.

Her precious baby boy, lifeless, face down in the water.

She had turned her head for just a moment to figure out a kerfluffle between the others, when someone shouted, “CORBAN!”

She raced to the edge and grabbed her limp little boy.

While Kelly has been in the medical field for over 20 years, NEVER had there been an emergency quite like this. With her quick thinking, she immediately started administering CPR.

Nothing. No breathing. No heartbeat.

Seconds felt like hours, and there was NO sign of life from the same little boy who was just running in the grass playing whiffle ball a few minutes before.

STILL nothing. Corban was a color that Kelly knew no human could be.

All at once Kelly felt an overwhelming Presence behind her. She described it as if someone was there, urging her to keep going and NOT give up. There was nothing that could stop her as she gave this little boy all that she had.

Jamie sat at her son’s feet, weeping and pleading with the Lord that she wasn’t ready to say goodbye to her baby.

As Kelly tried to sweep what was out of his mouth out, she heard a gasp. An AMAZING sound when you’re giving CPR.

She turned him over and patted his back, which led to hearing Corban come back from the still state he was in.

The other friends who were there all took on a mission. One called 911, another took care of the children, who were SO frightened to see their sibling/friend fighting for his life, and everyone rallied over Corban.

When he came to, he screamed louder than ever, which was music to everyone’s ears. He leaped into his mommy’s arms and they both just cried with thanks to God.

What could have ended in disaster, was turned upside down, thanks to Kelly.

The EMT arrived and paramedics rushed both Jamie and Corban to the hospital. He only needed a night of observation and was able to go home the next day and live life to the fullest, as any 3-year-old should.

The next day Corban met his REAL LIFE HERO and ran into Kelly’s embrace telling her, “I love you.” 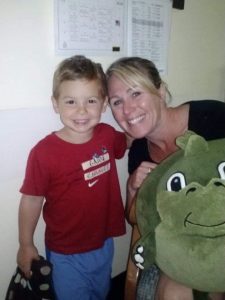 This photo was taken at the hospital, and the stuffed animal Kelly is holding has been named Mr. Cuddles by Corban, who STILL sleeps with it!

Kelly and Jamie have both experienced PTSD from this event, but they know it would be a different type of anxiety had Corban not been revived.

Jamie says that she and Kelly will always have an incredible bond like no other. 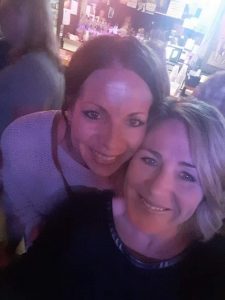 It’s a friendship that is evident to anyone who meets them.

Kelly was NOT supposed to be there that day, and no one wants to imagine what life would be like had she been working, or out of town at that ball game.

Jamie knows that she has a mission to spread hope to other parents who have lived real-life nightmares. There IS help, and while it might not happen overnight, healing with time does happen.

She and Kelly both urge EVERYONE to be CPR certified and ready to jump into action at any time there is an emergency.

Kelly was deservedly awarded the St. Joseph County Sherriff’s Department award for her bravery and quick thinking. Since that day at the pool, over 100 family members, friends, and co-workers have been certified. Now it’s YOUR turn! 🙂

In the warm weather with pools opening and children eager to play in the water, PLEASE be ready by becoming CPR certified. It truly saves lives.

Jamie also encourages parents to enroll their children in swim class as soon as possible.

Listen to this amazing story and hear how Corban is today in the latest episode of the Squadcast, the Mom Squad podcast! Find it on Apple Podcasts, Google Play, Spotify or wherever you find podcasts! 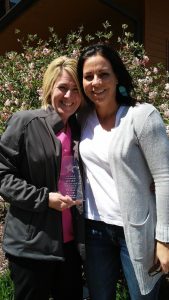